Ok, I'm watching Jenna on Jay, and I swear I just heard John's voice. Not on Leno, of course, but on an Ask.com commercial. I could just have John on the brain, but I swear it sounded just like him!

I wasn't really paying attention to the commercial, but there was a monkey in boxers talking (yes, talking) about using tools. And then a John-sounding person did some narrating bit.

Am I right or going bananas? Anyone?

Cute interview vid with Jenna and John over at CNN: http://edition.cnn.com/SHOWBIZ/


Sorry if this was already posted.

Guuuyyysss!!! I'm so excited!
I've only been watching The Office since August. I was a die hard fan of the UK version so I didn't want to watch the US version. It's a good thing I finally got over that.

Anyways, the reason I made this post is because I had my first Office moment!!! I always read on here about people having Office experiences in their own life, and I finally had mine!!

I've been getting the 2nd season DVDs from netflix. Sometimes my dad walks in the room while they are on when he has nothing to do. Lately it seems that he has made it a point to walk in the room when I am watching (he recently told me his favorite charecter is Dwight. Did I convert him?).

So we were watching a movie tonight (thursday) and my mom says "I keep on thinking tomorrow is Saturday." My dad turned to me and said "Uh oh, do you think Jim got to her too?"

I know, reeeeaaally long post for something so simple, but I am just so excited!!

The website Fametracker has posted an article in its feature 'Two Celebrities One Slot,' "Battle of the Deadpan Dreamboat," which compares Topher Grace and John Krasinski. (You can find the article here:  http://www.fametracker.com/2_stars_1_slot/grace_krasinski.php).

I just realized I've never shared my Jim's "Hi" After Jinx wallpaper with you guys. 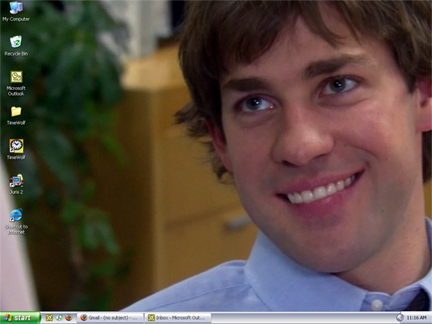 It's on my work computer, so I get to stare at this infamous "swoon" face all day long, and I figured there were at least one or two of you out there who'd like to do the same.

Someone said this had already been posted a few days ago but I went back and looked and didn't see it anywhere. If someone finds it, I want to see it.

Anyway, there's a short article about Jim and Pam in TV Guide for the week of October 2-8th. It has Josh Holloway from Lost on the cover.
It's "spoiler-ish" so I'll put it in a cut.

I looked in this community and didn't see any discussion for the Convention's deleted scenes (click here to watch them).

I had a couple of questions come to me while I was trying to go to sleep last night about The Convention and since no one I know outside of livejournal seems to care for the show, I thought I'd share them here and get some thoughts on the matters at hand.

4] This has nothing to do with my needing to have opinions on ever happening on/ in the office, but have any caps been posted for The Convention yet? I've seen a few icons from the episode but have yet to find some caps.

in the october 6th issue of entertainment weekly with kate winslet on the cover theres a small dwangela article...about a scene they decided not to put in...

i tried looking on the ew site to see if they had it but i couldn't find it(so sorry if theres any spelling mistakes that i didn't catch)...but its so worth it to just type it out for you guys to read...

Random note about the filming location of "The Covention". Minor minor spoilers.

i'm kind of confused on something about last night's episode...

( Collapse )
I'm planning on having an Office themed Halloween costume this year. But if there's a Halloween episode this year, there might be new ideas for costumes as well. ( Collapse )

So will Dwight be able to top his Sith outfit? Will Michael come as something topical, like Monica Lewinsky or Janet Jackson's boob? Will Jim wear a costume at Stamford, and no one else will, so he'll fit in even less?

Reading tv guide online and noticed the Ausiello Report dissed last night's episode of the office (there's no spoilers so no worries).

So it got me thinking...does anybody else get upset or annoyed when people diss the office? I've had several moments reading online or talking to even one person who was like "eh, it's not funny", where I of course have to sit and explain why it's hilarious and genius and beat them down with my words.

Another thing....the tv guide guy hates dwight. I just don't understand how people could not find him funny. And to make that point after the episode where he wasn't really central to the plot really annoys me.
Collapse